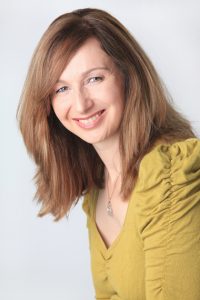 There’s a very old joke about a Liverpool bus passenger asking the conductor (remember them) “Is this bus going to Speke?”

“I’ve been on it all day,” says the conductor (in a Scouse accent, presumably) “and it hasn’t said a word to me.”

These days the buses in London never stop talking, constantly reminding you about the next stop, occasionally telling you to “Alight here” for some notable building or monument.

The more helpful “This bus terminates here” is instructing you to get off, because the bus ain’t going nowhere.

That’s fine if you can speak English, but I once left a top deck filled with foreign visitors staring out of the windows and staying put. For all I know they’re still there.

The charming voice passing on these nuggets of information is Emma Hignett (pictured) who got the job as TfL’s voice of the buses back in 2006 and since then has recorded around 60,000 announcements which she records in her own sound-proofed studio in her loft. She also does the announcements for the London Overground and the riverboats.

But it’s her latest announcement which is causing a twitterstorm. It’s supposed to ring out just as the bus is about to set off: “Please hold on – the bus is about to move”  but in practice the bus has already lurched away from the bus stop before the message is heard.

To most passengers it seems a bit like stating the bleeding obvious. The bus arrives at a bus stop and people get off and people get on and then the bus sets off again. If you’re the sort of person who needs to hold on you will hang on for grim life without being reminded. Otherwise – especially on a longer trip – you will get more and more irritated.

Of course you may not even hear it as you irritate your fellow passengers with the noise leaking from your headphones.