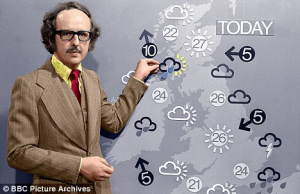 Definitely no hurricanes at the moment

The famous headline apparently was never used in quite quite that form which is a bit of a blow, but it’s certainly been quoted as such ever since.  And (as John Major might have said) there is considerable warmth at the present time, so it’s turning up quite a lot in newspaper articles and in conversation generally. As I write (wearing little more than a Panama hat) it’s 29.5 Celius which is about 85 degrees Fahrenheit in old money.

So why – I hear you ask – do we say Celsius and not Centigrade as we always used to at school.

It seems to stem from a notion on the part of Conference General de Pois et Measures that all temperature scales should be named after people personally associated with them like Kelvin, Celsius and Fahrenheit,

So in 1948 the centigrade scale was renamed Celsius after the Swedish astronomer Anders Celsius (1701-1744). His scale actually had 0 as the boiling point of water and 100 as the freezing point.  Some time later the Swedish zoologist and botanist, Carolus Linnaeus reversed it so it had zero as freezing. I suppose he had his reasons.

Back in 1976 when we had weather like we have now (with no rain) for three months Michael Fish and his fellow BBC weatherfolk would have added the Fahreneit equivalent in imaginary brackets.  It takes a long time (up to three generations, apparently) for a name change like that to be universally accepted. Tabloid newspapers are still apt to talk about 90 degrees in the shade.

Oscar Wilde loathed the English preoccupation with weather, calling it “the last refuge of the unimaginative”, so I shall go and have a cold beer and try and think of something original to say…