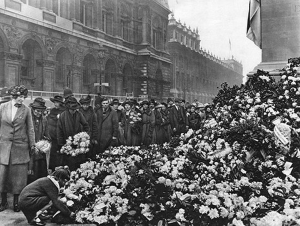 Flowers at the Cenotaph 1920

It’s very common to hear an extraordinary event or circumstance described as being the biggest, strangest, most moving, most tragic of its kind ever seen. Sometimes this may be justified. Clearly the first time man stepped on the moon was an absolute first. But it is still easy to forget that the search for the source of the Nile or the race to the South Pole (and the tragic outcome for Captain Scott) roused similar emotions

1997 saw a remarkable set of events by any standards, starting with the death of a Princess and her lover in a Paris underpass, leading to a week of increasingly hysterical emotion from public and media alike, culminating in the spectacle of London preparing itself for a Tehran style invasion of millions coming for the funeral of the people’s Princess.

It was confidently stated that nothing to equal the outpouring of grief for Lady Diana, Princess Di, the Queen of Our Hearts, had ever been seen. The mountain of flowers, photographs, soft toys and tearstained handwritten messages engulfing the gates of Kensington Palace was unique. And of course, fifty, a hundred years hence such an event could never be forgotten. And the woman whose untimely death caused such sorrow would also never be forgotten.

How many visitors to Westminster Abbey where Diana was euologised at her funeral service, noticed the Tomb of the Unknown Warrior, whose empty tomb at the Cenotaph received just as many visitors and almost as many flowers as Diana’s wailing wall at Kensington Palace. That happened, people said it would never be forgotten…

And who remembers Princess Pat, the most popular Royal in her day, Colonel in Chief of a Canadian regiment decimated at Vimy Ridge in 1915, determined to break conventions and marry the commoner she loved. And who remembers that Princess Pat, granddaughter of Queen Victoria, really did give it all up for love, renouncing her titles and marrying her lieutenant in Westminster Abbey in February 1919 (picture below). 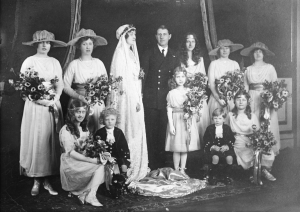 Now there was a wedding to rival that of Charles and Diana, the first royal wedding in Westminster Abbey since 1262. And the crowds, the crowds… But who remembers any of it. Princess Pat became Lady Pat, and as Diana came from obscurity to painful public figure and finally death, so Patricia, who won a nation’s hearts went back into the shadows and died at home on 12 January 1974, eight weeks before her 88th birthday and a year and a half after her husband.

At the time of her death, she was the younger of only two surviving female grandchildren of Queen Victoria (the other was Princess Alice).

I think the points in this piece – which I wrote on the fifth anniversary of Diana’s death in 2002 – are still as valid.