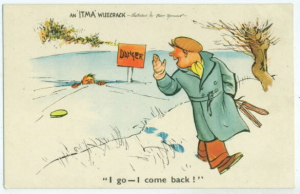 “I go – I come back” was one of the phrases born out of the whimsically surreal and satirical radio series It’s That Man Again (ITMA) which entertained wartime and postwar Britain until the death of its star Tommy Handley in 1949, 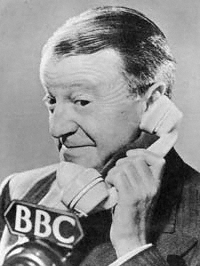 His popularity can be judged from the large number of mourners (or sightseers) who lined the six mile route between the private chapel at Westbourne Grove and the Golders Green Crematorium, and the fact that two memorial services were held – one at St. Paul’s Cathedral and the other at Liverpool Cathedral.

Only a few episodes of ITMA still exist.  Listening to the show raises the odd smile rather than a lot of laughs, but the genesis of so many other radio and tv shows, particularly Round the Horne, The Goonshow, and Monty Python can be found there. You can find some of the radio shows togther with ITMA’s only movie outing from 1942 on Youtube

A large number of oddball characters had their own catchphrases: charwoman Mrs Mopp – Can I do you now sir?  Deepend Dan – ‘Don’t forget the diver sir, don’t forget the diver’. Colonel Chinstrap – ‘Don’t mind if I do’ which was said by way of turning round any question into the offer of a drink, and ‘After you Claude, no, after you Cecil’ from a couple of upper class twits sounding vaguely like a 60s favourite ‘Hello I’m Julian, this is my friend Sandy’.

And so we come to the nub of this piece. ‘I Go, I Come Back’ was the riposte of Ali-Oop (forgive the racism!) an intinerant MIddle Eastern door door salesman who used that phrase as the riposte to his invariable brush off. There’s a brief flavour of Horace Percival’s character in the short Youtube video below. I don’t suppose the actor blacked up for the radio show.

Anyway, why you cry are you telling me all this. We were just talking recently about why I sometimes use that phrase.  I remember very clearly being told by a fellow encyclopedia salesman called Jack (we were both students trying to earn a few quid in the summer of 1968) that his mother had encountered such a middle-eastern door to door merchant who’d used the very same phrase. Apparently he also said –  ‘only small things, only small things’ presumably about the goods he was hawking. I haven’t tracked that down to ITMA but it’s possble it comes from there as well.

Maybe the salesman Jack’s mother encountered was merely channelling Ali-Oop or perhaps Jack misunderstood. Or I’ve misrembered. Who knows?  Now I suppose I have to tell you about the weird and wonderful world of student encyclopedia salesmen in the 1960s.

Another time, perhaps. I go, I come back….