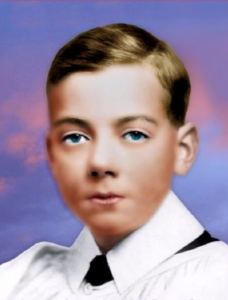 I doubt that many of the Dan Brown fans who visit the Temple Church ever notice the wooden plaque recording the fact that it was here in 1927 that one of the first best-selling records in history – O For the Wings of a Dove – was made by the Temple Church Choir under their choirmaster George Thalben Ball.

Back when I wore short trousers to school and computers were the size of buses that record was regularly requested on the Saturday morning radio programme ‘Children’s Favourites’. Probably not by the kids who were listening….

The boy soprano soloist was a ‘Master’ Ernest Lough, who had the voice of an angel and unbelievably was fifteen years old. (His voice didn’t break till two years later).

The music itself – written by Mendelssohn – is actually titled ‘Hear my Prayer’ and ‘O for the Wings…’ is just a short stanza art the end. Nowadays it’s often fleshed out into a much longer piece. I suspect what we used to reluctantly listen to was that extended version.

The record, which was released in June 1927, was staggeringly successful. So many copies were sold during the first six months that the master disc wore out, and another version had to be made.

Lough developed his own fan base, even though nobody knew very much about him. Weird rumours circulated about this angelic-voiced boy singer. The most bizarre story claimed he’d died during the recording, snatched by heaven for its own. It was rumoured he’d died in a car crash, or that he’d died of consumption aged seven. Most people assumed he was much younger than he was.

Lough was playing football outside the church when two elderly ladies approached him to ask where they might leave donations to the Ernest Lough Memorial Fund.

Forty years later ‘Master Lough’ was still receiving gifts of sweets and comics from appreciative fans who had no idea how long ago it had been recorded.

The 78 rpm version stayed in HMV’s catalogue until the late 1950s. By then iit had passed te million-sale mark though it wasn’t till 1962 that Lough was finally handed his gold disc. By 2000 – the year that Lough died aged 88 – worldwide sales had topped 5 million.

Sadly he never made much money from the session, as all royalties were shared between the church, the choirmaster and the other 24 members of the choir.