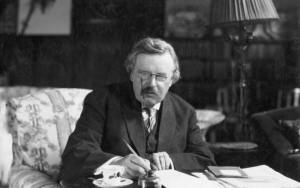 G K Chesterton in jovial mood (or not)

So far the only saint with any Battersea connections seems to be Saint Ethelburga, who was probably just visiting her brother Saint Erkenwald, Bishop of London who may have lived round here. That may change, now Pope Francis – said to be a fan of the Father Brown Stories – has given support to the idea of G K Chesterston’s beatification – the first stage on the long road towards sainthood.

The prolific author’s connection with Battersea is anything but tenuous. From 1903 until 1910 he lived at 60 Overstrand Mansions, near the park on Prince of Wales Drive. You can read all about him in Penny Corfield’s article in the Summer 2013 edition of Battersea Matters. Somehow the image of Battersea gaining a new patron saint, larger than life (in more ways than one) wearing a dashing sombrero, carrying a swordstick and with a cigar constantly dangling from his lips, seems  appropriate.

The BBC has the latest on the story

Given the current dearth of rain perhaps we should look to Saint Gilbert to become Battersea’s patron saint of weather. He was quite a fan of rain it seems, and was a bit miffed at missing the flooding of the neighbourhood in 1908 when on 30 June London had over two inches of rain dumped on it  in twenty-four hours,

So if you’re that way inclined, say a little prayer as you read on:

Enjoying the Floods and Other Disasters

I feel an almost bitter envy on hearing that London has been flooded in my absence, while I am in the mere country.My own Battersea has been, I understand, particularly favoured as a meeting of the waters. Battersea was already, as I need hardly say, the most beautiful of human localities. Now that it has the additional splendour of great sheets of water there must be something quite incomparable in the landscape (or waterscape) of my own romantic town. Battersea must be a vision of Venice. The boat that brought the meat from the butcher’s must have shot along those lanes of rippling silver with the strange smoothness of the gondola. The greengrocer who brought cabbages to the corner of the Latchmere Road must have leant upon the oar with the unearthly grace of the gondolier. There is nothing so perfectly poetical as an island; and when a district is flooded it becomes an archipelago.

The joy of inconveniences

Some consider such romantic views of flood or fire slightly lacking in reality. But really this romantic view of such inconveniences is quite as practical as the other. The true optimist who sees in such things an opportunity for enjoyment is quite as logical and much more sensible than the ordinary “Indignant Ratepayer” who sees in them an opportunity for grumbling. Real pain, as in the case of being burnt at Smithfield [where the Protestant martyrs were burned during the reign of Queen Mary] or having a toothache, is a positive thing; it can be supported, but scarcely enjoyed. But, after all, our toothaches are the exception, and as for being burnt at Smithfield, it only happens to us at the very longest intervals. And most of the inconveniences that make men swear or women cry are really sentimental or imaginative inconveniences—things altogether of the mind.

Waiting for a train

For instance, we often hear grown-up people complaining of having to hang about a railway station and wait for a train. Did you ever hear a small boy complain of having to hang about a railway station and wait for a train? No; for to him to be inside a railway station is to be inside a cavern of wonder and a palace of poetical pleasures. Because to him the red light and the green light on the signal are like a new sun and a new moon. Because to him when the wooden arm of the signal falls down suddenly, it is as if a great king had thrown down his staff as a signal and started a shrieking tournament of trains. I myself am of little boys’ habit in this matter. They also serve who only stand and wait for the two fifteen. Their meditations may be full of rich and fruitful things; and many of the most purple hours of my life have been passed at Clapham Junction, which is now, I suppose, under water. I have been there in many moods so fixed and mystical that the water might well have come up to my waist before I noticed it particularly. But in the case of all such annoyances, as I have said, everything depends upon the emotional point of view. You can safely apply the test to almost every one of the things that are currently talked of as the typical nuisance of daily life.

So I do not think that it is altogether fanciful or incredible to suppose that even the floods in London may be accepted and enjoyed poetically. Nothing beyond inconvenience seems really to have been caused by them; and inconvenience, as I have said, is only one aspect, and that the most unimaginative and accidental aspect of a really romantic situation. An adventure is only an inconvenience rightly considered. An inconvenience is only an adventure wrongly considered. The water that girdled the houses and shops of London must, if anything, have only increased their previous witchery and wonder. For as the Roman Catholic priest in the story said: “Wine is good with everything except water,” and on a similar principle, water is good with everything except wine. Last week may be said to have exhibited teetotalism on a gigantesque scale. To have water, water everywhere, and not a drop to drink seems to me to put that element exactly to its proper use. The whole human race has exhibited as one consistent principle the principle that those who saw most of the water drank least of it. Fishermen, sailing men, divers, and all others have always acted upon the idea that there might be any amount of water outside them, but none inside them.